Grandparents Quotes: Have you ever wondered why some grandparents have strong bonds with their grandchildren while others do not? It’s not an enigma. The secrets have been discovered through research, but many grandparents are still unaware of them. With a thoughtful quote, you can show your grandparents how much you care. Look through this collection of sentimental quotes that any grandpa or grandma would appreciate. Grandparents live longer lives and are more active and involved in the lives of their children and grandchildren. The relationship that grandfathers and grandmothers have with the rest of their families is truly unique. It’s easy to see why they’re well-liked and respected.

This information is unlikely to assist grandparents who have lost contact with their grandchildren or who are dealing with deep-seated family conflicts that may necessitate therapy. This information, on the other hand, could be crucial for the rest of us. Being a grandparent is a wonderful experience! When you go from being a parent to being a grandparent, a lot of things change. Grandparent quotes are provided below so that you can experience the magic that occurs when one becomes a grandparent. These grandparent quotes are sure to make you smile and warm your heart. There’s nothing like becoming a parent to a parent, and these quotes are a lovely reminder of the love that grandparents have for their grandchildren.

♥ “A child needs a grandparent, anybody’s grandparent, to grow a little more securely into an unfamiliar world.” — Charles and Ann Morse

♥ “The best parents get promoted to grandparents.” – Unknown

♥ “What bargain grandchildren are! I give them my loose change, and they give me a million dollars worth of pleasure.” — Gene Perret

♥ “Becoming a grandmother is wonderful. One moment you’re just a mother. The next you are all-wise and prehistoric.” – Pam Brown

♥ “Truth be told, being a grandma is as close as we ever get to perfection. The ultimate warm sticky bun with plump raisins and nuts. Clouds nine, ten, and eleven.” – Bryna Nelson Paston

♥ “The old are the precious gem in the center of the household.” – Chinese Proverb

♥ “Children brought up by their grandparents are generally spoiled.” – Spanish Proverb

♥ “If nothing is going well, call your grandmother.” – Italian proverb 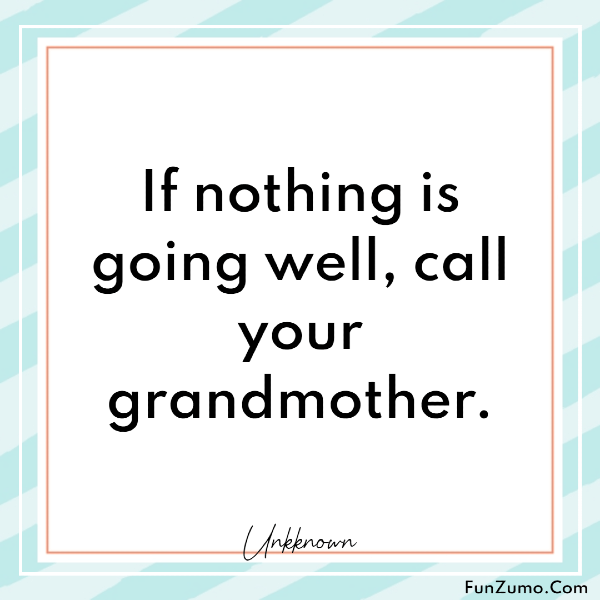 ♥ “The reason grandchildren and grandparents get along so well is that they have a common enemy.” – Sam Levenson

♥ “You never know the love of a grandparent until you become one.” – Unknown

♥ “Have children while your parents are still young enough to take care of them.” — Rita Rudner

♥ “Being a grandparent means you can be as silly you want to be.” – Unknown

♥ “Sometimes our grandmas and grandpas are like grand-angels.” — Lexie Saige

♥ “A grandparent has silver in their hair and gold in their heart.” – Unknown

♥ “A mother becomes a true grandmother the day she stops noticing the terrible things her children do because she is so enchanted with the wonderful things her grandchildren do.” — Lois Wyse

♥ “Something magical happens when parents turn into grandparents” – Unknown

♥ “Truth be told, being a grandma is as close as we ever get to perfection. The ultimate warm sticky bun with plump raisins and nuts. Clouds nine, ten, and eleven.” – Bryna Nelson Paston

♥ “One of the most powerful handclasps is that of a new grandbaby around the finger of a grandfather.” – Joy Hargrove

♥ “Young people need something stable to hang on to — a culture connection, a sense of their own past, a hope for their own future. Most of all, they need what grandparents can give them.” – Jay Kesler

♥ “Grandparents are the best kind of grownups.” – Unknown

♥ “What children need most are the essentials that grandparents provide in abundance. They give unconditional love, kindness, patience, humor, comfort, life lessons. And, most importantly, cookies.” – Rudolph Giuliani

♥ “Few things are more delightful than grandchildren fighting over your lap.” – Doug Larson

♥ “Grandma always made you feel she had been waiting to see just you all day and now the day was complete.” – Marcy Demaree

♥ “When grandparents enter the door, discipline flies out the window.” – Ogden Nash

♥ “There are fathers who do not love their children; there is no grandfather who does not adore his grandson.” – Victor Hugo

♥ “Every house needs a grandmother in it.” – Louisa May Alcott

♥ “The smart, kind, beautiful child… must have got it from their grandparents.” – Unknown

♥ “There are no words to describe the happiness in holding your baby’s baby.” – Unknown

♥ “Some of our greatest blessings call us grandma and grandpa.” – Unknown

♥ “Love is the greatest gift that one generation can leave to another.” – Richard Garnett

♥ “Everyone needs to have access both to grandparents and grandchildren to be a full human being.” — Margaret Mead 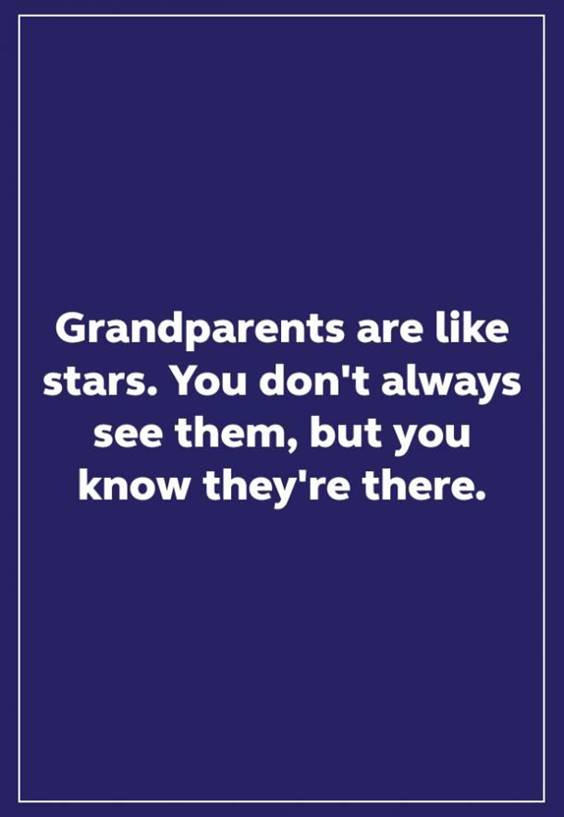 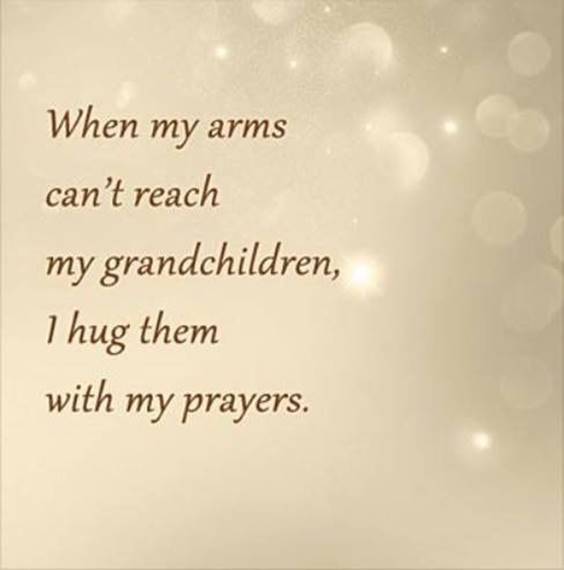 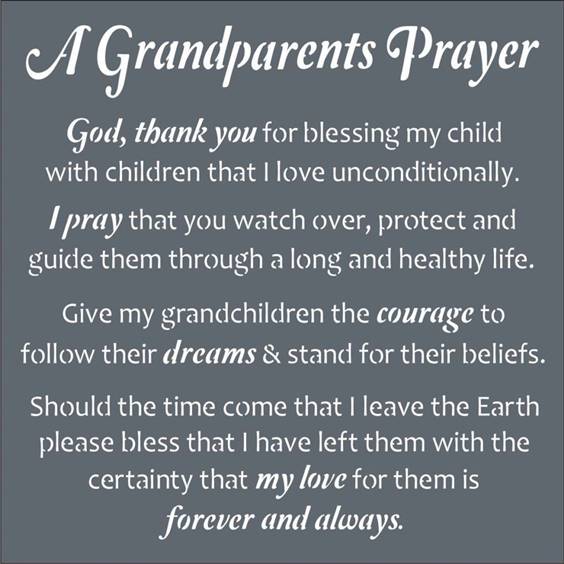 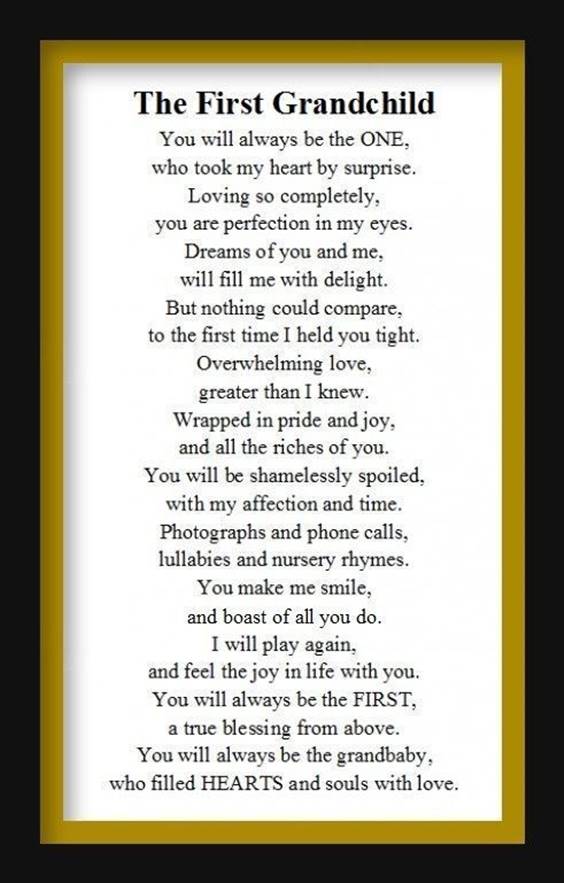 Growing Up With Grandparents Quotes

The Importance of Grandparents in the Family

When grandparents provide child care for their grandchildren or take on the role of actual or surrogate parents, they have a better chance of bonding than the average person.

Many grandparents who fill these roles, on the other hand, wish they could be “regular” grandparents instead of filling parental shoes.

Furthermore, research shows that it is the regular presence of grandparents, not the functions they perform, that fosters closeness. You can be close to your grandchildren, whether you are a grandparent who has taken charge of them or a “cool” grandparent who mostly plays with them.

Families who expect strong intergenerational relationships are more likely to have them. This is because family members are taught from a young age that they must share responsibilities. These responsibilities could include child and elderly care, financial assistance, and general task sharing. And the help goes both ways — from young to old, and from old to young.

This culture is more likely to foster strong grandparent-grandchild bonds than values that emphasize individuality and independence. In addition, such families practice practices that keep extended families close.

Although grandparents and grandchildren are often described as being close, grandparents may be closer than the younger generation. It’s only natural.

Children are closest to their parents and siblings when their families are functioning properly. Grandparents are usually in the second tier or circle of emotional proximity. Children’s circles expand as they grow older, and their peers become increasingly important to them. Grandparents may be displaced even more.

Grandparents, on the other hand, often find themselves in a world of shrinking circles as their peers and older relatives pass away, move away, or suffer from serious health problems. Their children and grandchildren may begin to take up more of their time.

What matters is that grandparents who form early emotional bonds with their grandchildren will find that those bonds will last.

Such bonds typically endure the passage of time and the many changes that both generations experience.

According to research, the middle generation plays a critical role in determining closeness. When grandparents and their adult children are close, it is natural and easy for them to be close with their grandchildren.

Parents and grandparents often instill values in grandchildren at a young age. They are, however, more likely to develop their own set of values as they grow older. Families become closer when they share common values, but few families will ever agree.

According to researchers, a generation gap can form when younger generations perceive older generations to be lacking in social tolerance and even hypocritical.

Geographic proximity is one of the strongest predictors of a close relationship between grandparents and grandchildren, which is unsurprising. Some grandparents may have no control over this factor, though some have shown a willingness to relocate to be closer to their grandchildren.

Other factors, such as the grandparents’ health and financial situation, can be factors if they limit travel. For grandparents who are fit, healthy, and financially able to afford frequent trips to see their grandchildren, distance isn’t as important as it once was.

Although grandparents agree that nothing beats face-to-face interaction, technology has made it easier to maintain contact with grandchildren who live far away. Many grandparents use FaceTime, Skype, or another video chat platform to communicate with their grandchildren daily.

As long as the text messages aren’t too frequent, older grandchildren will appreciate them. Staying in touch with tweens, teens, and young adult grandchildren via Facebook and other social networking sites is also a good idea. In the end, adoring grandparents will find a way to reconcile their differences.

Of course, more fathers are gaining custody of their children, and joint custody is becoming more common. Perhaps, in the future, divorce will have less of an impact on the grandparent-grandchild relationship than it does now.

Overall, the grandparent who is committed to developing a strong and lasting relationship with their grandchildren has the best chance of succeeding.

80 Sweet Love Messages For Your Wife – Romantic Lines For Wife